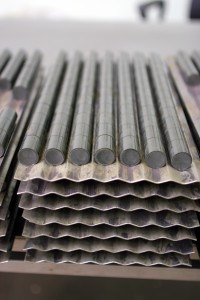 The Nuclear Fuel Plant is located near the town of Mioveni-Arges at 25 kilometers from Pitesti.

The fabrication of the CANDU nuclear fuel started in 1980, through the commissioning of a CANDU type Fuel Pilot Plant operating as a department of the Nuclear Research Institute (ICN) Pitesti. The separation of the Nuclear Fuel Plant from ICN, as a distinct branch, occurred in 1992.

During  2004-2006, by small investment, FCN Pitesti was able to double its production capacity in order to ensure the operation of two units.

In 2008, FCN delivered the transport number 100 to Cernavoda NPP, with a a total content of 1300 tones of uranium (equivalent to 32 milion tones of brown coal).

FCN Pitesti is capable to offer consultancy, technical assistance and a series of equipment to the companies interested in technology transfer and nuclear fuel production.

During its life time inside the reactor – about 1 year – a  CANDU 6 type nuclear fuel bundle generates an amount of 1,115 MWh. The same energy amount can be obtained by burning fossil fuels in conventional power plants, as follows: