Project for the Tritium Removal Facility 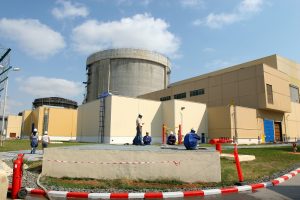 The project is part of Nuclearelectrica’s portfolio of initiatives, aimed at the consistent implementation of the Company’s general policy, namely the concern for maintaining nuclear safety at the highest standards, and reducing both radiological risks for own staff and the public, as well as the environmental impact. The project represents a materialization at the highest level of the continuous concerns to improve the performance of the Cernavoda NPP with a positive impact on the staff and leading to a decrease in tritium discharges in the air and in the water, with a positive impact on the protection of the population and the environment.

The implementation of the project will allow, by extracting the tritium from the heavy water, and storing it under a safe form in a dedicated facility, the elimination of heavy tritiated water from the category of radioactive waste, thus significantly reducing the quantity of radioactive waste left to be managed at the end of the operational life of the two reactors.

The project is based on an implementation strategy, updated by SNN in 2018, based on the Feasibility Study, approved by Decision No. 9/August 22, 2018 of the Extraordinary General Meeting of Shareholders.

The project involves the completion of the design of the facility (detail design), the construction of the tritium removal facility, tests and verifications for commissioning, a trial operation period of 6 months, followed by the entry of the plant into commercial operation, planned for 2026.

To finance the project, SNN has engaged in discussions with the European Bank for Reconstruction and Development (EBRD). These debates are at an advanced stage, which is why, in addition to the evaluations and supporting documentation specific to the Romanian legislation, already initiated (in relation to the Ministry of Environment, Romanian Waters, CNCAN, etc.), it is also necessary to go through a specific EBRD approval procedure.

EUR 194 million, of which EUR 150 million through EBRD loan

The realization of CTRF will have a positive impact because by extracting the tritium from the moderator, and the cooling agent of the reactor, it will contribute to the reduction of the tritium discharges in the environment and will allow for the heavy water to be reused for an indefinite period, without becoming a radioactive waste. The tritium recovered from the cooling agent and the moderator will be processed and stored under stable conditions for further use. In addition, CTRF will lead to: