Project for the Small Modular Reactors-SMR 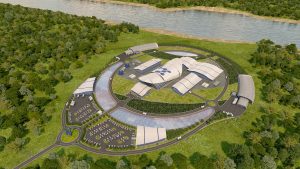 Romania has the potential of implementing small modular reactors, and becoming a catalyst for the development of SMR in the region, and also a base for ensuring the operation of this new type of technology in other states. For this purpose, we will develop the first simulator for the control room of a modular reactor, which we will use for training the new generation of engineers.

In this regard, in November 2021, Nuclearelectrica and NuScale Power signed an agreement in order to advance the implementation of the innovative technology of the small modular reactors of NuScale, in Romania, in this decade.

This agreement follows a MoU concluded in 2019 with NuScale and a grant of 1.2 million dollars granted by USTDA to SNN for assessing potential sites.

Romania has over 25 years of experience in safely operating one of the highest-performing power plants in the world, and a team of professional engineers, a globally-renowned local school of engineers, and a vast supply chain.

Approximately 70 concepts of SMR reactors are in progress, in various stages, with technological differences, a different implementation level, as well as various licensing levels, which proves the interest and innovation in this field, and the efforts of regulatory agencies to license the SMR reactor. Countries such as France, UK, Poland, Bulgaria, USA and Canada are making intense efforts to implement SMRs. However, NuScale is the first SMR reactor which has received the design approval from the U.S. Nuclear Regulatory Commission (NRC), and will follow all the necessary steps for obtaining the license in EU and in the countries that are interested in implementing it.

In virtue of the Agreement between SNN and NuScale, NuScale will support Nuclearelectrica in assessing this technology and, together, the two companies will take measures for developing the small nuclear reactors in Romania.

6 modules with an installed capacity of 462 Mwe

NuScale’s nuclear technology will mainly be developed on the sites of former coal-fired power plants. Thus, it will support the National Recovery and Resilience Plan of the Government of Romania to decommission 4.59 GWe of coal capacity by 2032.

It will be estimated following the preliminary stage of project configuration

It will be estimated following the preliminary stage of project configuration

A NuScale power plant with 6 modules will generate 193 permanent jobs, 1500 jobs during the construction period, 2300 jobs in manufacturing.

4 million tons of CO2 every year